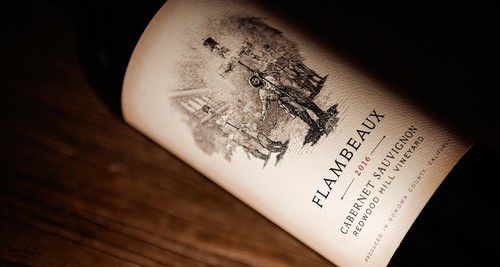 In the spirit of giving back to support Sonoma County fire victims and the winery’s hometown of Healdsburg, Flambeaux Wine has released a Cabernet Sauvignon made from the Redwood Hill Vineyard in the Fountaingrove region of Sonoma County, with a portion of the proceeds set to benefit fire relief efforts.

A limited release of the 2016 Flambeaux Redwood Hill Vineyard Cabernet Sauvignon, a single vintage edition, is now available with a percentage of sales designated for the non-profit Corazón Healdsburg, selected because 100% of monies received for the “Unity & Community Fund” are directly distributed to families in need due to the impact of recent fires.

The Redwood Hill Vineyard was located high in the Mayacamas Mountain Range east of Santa Rosa in Sonoma County and west of Calistoga in Napa County. Unfortunately, the vineyard and property suffered extensive damage in the 2017 Tubbs Fire, then ceased operation thereafter.

“I loved that vineyard,” said Art Murray co-founder and president of Flambeaux, “It is an altitude site with volcanic soil, sitting at more than 1,000 feet and above the fog line. Massive temperature swings with ample sun and cold nights, results in really concentrated fruit. We made our Redwood Hill Cabernet Sauvignon from that vineyard, and after the Tubbs Fire, we decided to designate a portion of its sales to support fire relief. It is a special wine, and only 86 cases were made.”

The recent Kincade Fire, which threatened Healdsburg where the Flambeaux Estate and Vineyard is located, as well as Windsor where the wines are made by Winemaker Ryan Prichard at Grand Cru Custom Crush, again heightened the need for fire relief support. Originally fromNew Orleans, the Murray family is deeply aware of ongoing, local disaster relief having experienced repeated hurricanes in that region, the most devastating memory being living through Hurricane Katrina.

“We are no strangers to displacement,” added Murray, “We are sensitive to natural disasters and the impact that they have on communities and want to give back, recognizing that so many people gave to New Orleans following Katrina.”

Flambeaux prides itself on making hand-crafted, limited-production wines that capture the essence of the Flambeaux Dry Creek Valley Estate Vineyard, as well as other world-class Sonoma County vineyards. The Flambeaux are the dancing torchbearers of New Orleans Carnival during Mardi Gras, representing tradition, light, dance and joy.

Art and Nicole Murray, co-founded Flambeaux in Healdsburg, California along with his parents Steve and Pattie Murray, and daughters Alys, Elizabeth, Nia and Lila Murray.

At Flambeaux, Winemaker Ryan Prichard (who makes wine at Three Sticks, and has also worked at Williams Selyem, Copain Custom Crush and Medlock Ames) employs the Murray family’s philosophy of allowing the grapes to evolve and naturally grow into what they become. With this minimalist approach, the fruit ends up as the best of itself and results in intriguing and exciting wines. Flambeaux currently produces a Dry Creek Valley Cabernet Sauvignon, Sonoma Valley Cabernet Sauvignon, Dry Creek Valley Zinfandel, Sonoma Coast Chardonnay and Sonoma County Rosé.